In the agricultural value chain, climate has 2 main implications:

Our region’s distinctive climate has been proved very visibly during 2012 frost siege over wider regions of Eastern and Southern Europe.  Samegrelo also experienced frosts but not below -3C° on three nights while during most critical days in first week of February 2012, daytime temperatures mostly maintained +4C° to +8C°. To illustrate this difference we decided to provide you with 2 meteo maps from weather forecasting service firm  Meteoblue: 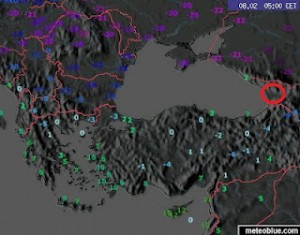 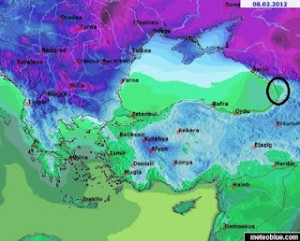 Green colored areas are positive temperature areas. As you can see that even within Georgia, Samegrelo (circled) is the warmest zone.

Our orchards are located in the Colchis Plain of Georgia. The Colchis Plain (of Jason and the Argonauts fame) is a humid subtropical zone which has a triangle shape with its base on the Black Sea. The sea provides rain and cooler breezes in the evenings. It also helps to warm north-western cold air masses before they reach our shores. Its northern side is the Greater Caucasus mountain chain, with peaks that are 3500-5000 meters high. These mountains block cold air masses from the north and ensure warm winter. The southern side is Minor Caucasus mountain chain, with peaks reaching 2500-3500 meters. These mountains moderate hot and dry air masses that come from the south and help maintain humidity in summer.

The plain includes several regions and our sub-region Samegrelo has about 1600-1900mm of annual rainfall with still plenty of sunshine in summer months, especially in July and August. Average January temperature is between +5C° and +9C° while that of July is about 24C°. Absolute minimum recorded temperature in January was -8C° while latest frosts occur in second half of March and mostly do not fall below -2C°. Interestingly during such frosts in March, relative air humidity exceeds 95% which reduces negative impact of frost. While warm enough, our region still gets enough chilling hours in the winter months to initiate bud development in early spring. 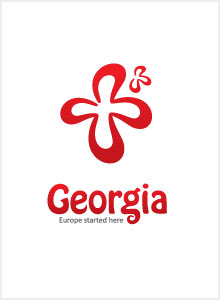